Where Is Trenton Now?

What Really Happens When I Die?

Everyday people are faced with one of the stark realities of life.  Whether fighting in a war or faced with a potential incurable disease or just old age, the question inevitably surfaces, What really happens when I die? God alone has immortality. (1 Timothy 6:15,16) And yet the Bible states in Romans 2:7 that by patient continuance in well doing we may seek for glory and honor and immortality, eternal life.

King David wrote in one of his psalms, speaking about man, His breath goeth forth, he returneth to his earth; in that very day his thoughts perish. Psalm 146:4

This statement is simply the opposite of the equation for life given at creation. Gen 2:7 And the LORD God formed man of the dust of the ground, and breathed into his nostrils the breath of life; and man became a living soul.  This creates two simple equations.

Ecclesiates 12:7  Then shall the dust return to the earth as it was: and the spirit shall return unto God who gave it.

The spirit that many talk about is simply the breath.

Job 27:3  All the while my breath is in me, and the spirit of God is in my nostrils;

Death, A Thoughtless State Of Sleep.

Death is simply a thoughtless state of sleep. When his friend Lazarus died, this is exactly how Jesus referred to death. John 11:11-14  These things said he: and after that he saith unto them, Our friend Lazarus sleepeth; but I go, that I may awake him out of sleep. Then said his disciples, Lord, if he sleep, he shall do well.  Howbeit Jesus spake of his death: but they thought that he had spoken of taking of rest in sleep.  Then said Jesus unto them plainly, Lazarus is dead.

The dead are resting in their graves, just like Lazarus was.  Would Lazarus really have appreciated being raised from the dead if he had been called back down from heaven?

In Acts 2:34   Peter states, For David is not ascended into the heavens…   This was years after the death of King David whom God called a man after his own heart (I Sam. 13:14, Acts 13:22) If any should be in heaven he should, for though he sinned immensely his repentance was genuine and God forgave him.

Psalm 115:17 reiterates The dead praise not the LORD, neither any that go down into silence.  Can you imagine that any righteous person could be in heaven and not praising God continually?

The Dead No Longer Participate In The Things Of This World

The Bible is very specific that the dead no longer participate in the things of this world.

Job 7:9,10  As the cloud is consumed and vanisheth away: so he that goeth down to the grave shall come up no more. He shall return no more to his house, neither shall his place know him any more.

The dead don’t return and haunt houses or visit relatives.  These are demons impersonating the dead, and consulting with them is forbidden by God.

Deuteronomy 18:10-12 There shall not be found among you any one that maketh his son or his daughter to pass through the fire, or that useth divination, or an observer of times, or an enchanter, or a witch, Or a charmer, or a consulter with familiar spirits, or a wizard, or a necromancer. For all that do these things are an abomination unto the LORD: and because of these abominations the LORD thy God doth drive them out from before thee.

Webster’s describes a Necromancer as - One who pretends to foretell future events by holding converse with departed spirits; a conjurer.

A spiritualist priest stated, According to the great master, people do not even have to seek help from the supposed spirits of the dead to find themselves enmeshed in necromancy. Belief in life after death itself, constitutes necromancy.  It allows demonic spirits opportunity to impersonate the dead. (A Trip into the Supernatural-Roger Morneau pg. 60)

This is what King Saul did after the death of Samuel. 1 Samuel 28:6,7  And when Saul enquired of the LORD, the LORD answered him not, neither by dreams, nor by Urim, nor by prophets.

1Samuel 28:11 Then said the woman, Whom shall I bring up unto thee? And he said, Bring me up Samuel.

Remember this was forbidden and pronounced an abomination by God.  Leviticus 19:31 Regard not them that have familiar spirits, neither seek after wizards, to be defiled by them: I am the LORD your God.

Is There Hope After Death?

If we know that death is like a sleep, is there any hope of life after death?  The Bible promises eternal life through Jesus our Saviour.

John 17:3  And this is life eternal, that they might know thee the only true God, and Jesus Christ, whom thou hast sent.

Those that accept Jesus Christ and follow His way will again have life one day.

1 John 5:11,12  And this is the record, that God hath given to us eternal life, and this life is in his Son. He that hath the Son hath life; and he that hath not the Son of God hath not life.

We show our love for God by keeping his commandments.

1John 2:4  He that saith, I know him, and keepeth not his commandments, is a liar, and the truth is not in him.

Those that truly love God will be raised to everlasting life.

Daniel 12:2 And many of them that sleep in the dust of the earth shall awake, some to everlasting life, and some to shame and everlasting contempt.

Just as Jesus rose again from the dead, we have the hope of the second coming of Christ.  Those that sleep in Jesus will be raised to everlasting life.  Paul says in 1 Thessalonians 4:13-17 But I would not have you to be ignorant, brethren, concerning them which are asleep, that ye sorrow not, even as others which have no hope. For if we believe that Jesus died and rose again, even so them also which sleep in Jesus will God bring (Greek-lead away) with him. For this we say unto you by the word of the Lord, that we which are alive and remain unto the coming of the Lord shall not prevent them which are asleep. For the Lord himself shall descend from heaven with a shout, with the voice of the archangel, and with the trump of God: and the dead in Christ shall rise first: Then we which are alive and remain shall be caught up together with them in the clouds, to meet the Lord in the air: and so shall we ever be with the Lord.

At this point our bodies will be changed and we will be given a new immortal body.

1 Corintians 15:51-54  Behold, I shew you a mystery; We shall not all sleep, but we shall all be changed, In a moment, in the twinkling of an eye, at the last trump: for the trumpet shall sound, and the dead shall be raised incorruptible, and we shall be changed. For this corruptible must put on incorruption, and this mortal must put on immortality. So when this corruptible shall have put on incorruption, and this mortal shall have put on immortality, then shall be brought to pass the saying that is written, Death is swallowed up in victory.

It is my prayer that if you are encountering the sting of death you will be Looking for that blessed hope, and the glorious appearing of the great God and our Saviour Jesus Christ;   Titus 2:13 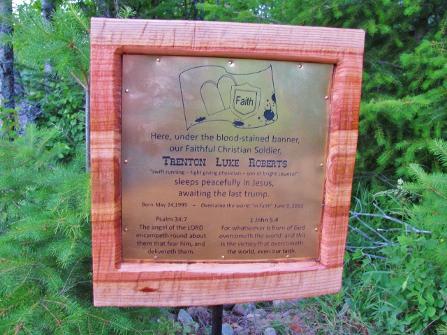 Encamped along the hills of light where Christian Soldiers Rise

A Video Study our New Son-in-law put together on the State of the Dead
Here is the above information on "What Happens when you Die?"  in a downloadable PDF format that you can e-mail and share with friends.  Share the Blessed Hope with Others!