Trenton loved 3-D modeling on his computer. He not only enjoyed making the pictures themselves, but he also was always checking out the newest tutorials and blogs about 3-D modeling on the internet. The name that he had chosen to call himself when on the internet was “The Timer”. I still don’t know why he chose that name, but that was what he called himself.

I don't believe that he had a true understanding of the significance of the pictures that he modeled when he was modeling them, just as I didn't either. But after he died, they began to take on much more significance to us. It was almost like God was directing the details of the pictures that he modeled so that they could teach us lessons after he was gone.

Trenton stated to his mother one time, "I'll never be a preacher, but a picture is worth a thousand words!"

Below are some of Trenton's "sermons"! 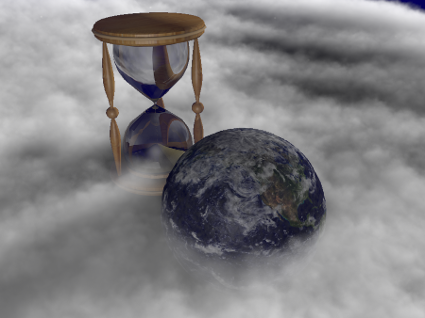 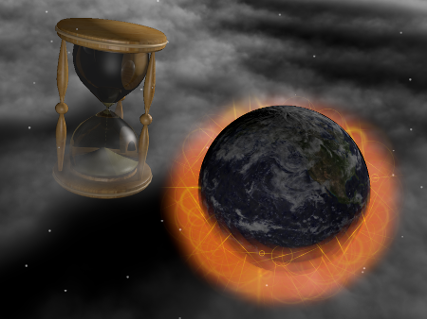 Notice that in the first picture, there is a fog or mist surrounding the earth.

"Men and women are wandering in the mist and fog of error. They want to know what is truth. Tell them, not in high-flown language, but with the simplicity of the children of God." Colporteur Ministry p.72

You will also notice that the hourglass (also called a sand Timer) is connected with the earth.

Then in the second picture, "The Timer" has been disconnected from the earth (Trenton's death-Ecclesiastes 9:5,6 and 9:10 the dead have no further connection with the world ), and there are beams of orange light that are flashing out encircling the globe and dispelling the fog and mists.

In the Bible, the word "orange" is not used, but the word "amber", the color of fire is used to represent the "Glory of God!"

"As the end approaches, the testimonies of God's servants will become more decided and more powerful,  flashing the light of truth upon the systems of error and oppression that have so long held the supremacy." Review & Herald, December 13, 1892

This brings us to the message of the fourth angel that is a combination of the first three angels put together.

1st Angel Rev 14:6,7  And I saw another angel fly in the midst of heaven, having the everlasting gospel to preach unto them that dwell on the earth, and to every nation, and kindred, and tongue, and people, Saying with a loud voice, Fear God, and give glory to him; for the hour of his judgment is come: and worship him that made heaven, and earth, and the sea, and the fountains of waters.

2nd Angel Rev 14:8  And there followed another angel, saying, Babylon is fallen, is fallen, that great city, because she made all nations drink of the wine of the wrath of her fornication.

3rd Angel Rev 14:9,10  And the third angel followed them, saying with a loud voice, If any man worship the beast and his image, and receive his mark in his forehead, or in his hand, The same shall drink of the wine of the wrath of God, which is poured out without mixture into the cup of his indignation; and he shall be tormented with fire and brimstone in the presence of the holy angels, and in the presence of the Lamb:...

4th Angel Rev 18:1  And after these things I saw another angel come down from heaven, having great power; and the earth was lightened with his glory.

"I saw angels hurrying to and fro in heaven, descending to the earth, and again ascending to heaven, preparing for the fulfillment of some important event. Then I saw another mighty angel commissioned to descend to the earth, to unite his voice with the third angel, and give power and force to his message. Great power and glory were imparted to the angel, and as he descended, the earth was lightened with his glory. The light which attended this angel penetrated everywhere, as he cried mightily, with a strong voice, "Babylon the great is fallen, is fallen, and is become the habitation of devils, and the hold of every foul spirit, and a cage of every unclean and hateful bird." [Revelation 18:1,2] The message of the fall of Babylon, as given by the second angel, is repeated, with the additional mention of the corruptions which have been entering the churches since 1844. The work of this angel comes in at the right time to join in the last great work of the third angel's message as it swells to a loud cry. And the people of God are thus prepared to stand in the hour of temptation, which they are soon to meet. I saw a great light resting upon them, and they united to fearlessly proclaim the third angel's message. Angels were sent to aid the mighty angel from heaven, and I heard voices which seemed to sound everywhere, "Come out of her, My people, that ye be not partakers of her sins, and that ye receive not of her plagues. For her sins have reached unto heaven, and God hath remembered her iniquities." This message seemed to be an addition to the third message, joining it as the midnight cry joined the second angel's message in 1844. The glory of God rested upon the patient, waiting saints, and they fearlessly gave the last solemn warning, proclaiming the fall of Babylon and calling upon God's people to come out of her that they might escape her fearful doom."  Early Writings p.277

This is a picture that he made, patterned after the old fashioned "Wanted" posters. His inspiration for the description was one of his favorite quotes from the book Education on page 57:

"The greatest want of the world is the want of men - men who will not be bought or sold, men who in their  inmost souls are true and honest, men who do not fear to call sin by its right name, men whose conscience is as  true to duty as the needle to the pole, men who will stand for the right though the heavens fall."

Speaking of that quote, here is a sermon that Trenton preached that he was not aware of.

We got a package in mail from The International Star Registry several weeks after Trenton's death. I didn't know anything about it but as it turned out, the Make-A-Wish foundation had submitted Trenton’s name to the Star Registry.

They had named a star in the constellation Ursa Major (Big Bear) as Trenton Luke Roberts. We know this constellation by its more commonly called name “The Big Dipper”. At first, I just thought it was a kind thought of them to name a star after Trenton, after all, I realize that it is not "Official" and I wouldn't have spent the money on such a thing. But then I started finding connections that to me, were more than just mere coincidence!

Dan. 12:2-3  And many of them that sleep in the dust of the earth shall awake, some to everlasting life, and some to shame and everlasting contempt. And they that be wise shall shine as the brightness of the firmament; and they that turn many to righteousness as the stars for ever and ever.

The constellation is actually not a bear, in the original Hebrew it is called the “Greater Sheepfold” and it represents the gathering of the saved and redeemed. I thought that was special that God would have them put Trenton’s star in that group!

If you study the stars, there are 12 main constellations and each one of those constellations has 3 other constellations that travel with it called "Decans." The order that the constellations rise from the horizon and travel across the sky, shows the plan of salvation and the history of the great controversy between Christ and Satan.

Gen 1:14  And God said, Let there be lights in the firmament of the heaven to divide the day from the night; and let them be for signs, and for seasons, and for days, and years:

The constellation Ursa Major (Big Bear) is the “second Decan of Cancer.” Cancer is the next to last constellation that comes up (just before Leo the Lion – Jesus Christ, the Lion of the Tribe of Judah = the 2nd Coming).

In other words, we are living right at the end of time, Trenton’s death comes just before the 2nd Coming!

The Word “Decan” means “breaking of or division”, so his star is in a constellation that literally is the “Breaking of Cancer.” Here I saw that Trenton is connected to unmasking the modern pharmaceutical “cancer” business, and the moving of the medical missionary work!

The star that they “randomly” chose for “Trenton” has magnitude of 14.1 – If you calculate up Trenton’s age when he died it was also 14.1.

I contacted the Make-A-Wish foundation and asked them if they had given the Star Registry any information about Trenton (other than his name) and they said “No”.

They also told me that another person was to be processed first, but Trenton’s paperwork came through before that person so they rushed it on through the process – which means that God was totally guiding the selection of that precise star for Trenton.

It is also interesting that two of the main stars in Ursa Major line up and point a straight line to the pole star “Polaris” which is in the constellation Ursa Minor. Trenton’s star is offset to the right of this line.

And here was a connection to that quote that Trenton liked (above).

“The greatest want of the world is the want of men,--men who will not be bought or sold; men who in their inmost souls are true and honest; men who do not fear to call sin by its right name; men whose conscience is as true to duty as the needle to the pole; men who will stand for the right though the heavens fall.” Education p. 57

So Trenton’s star, lines up exactly where this quote says it should. 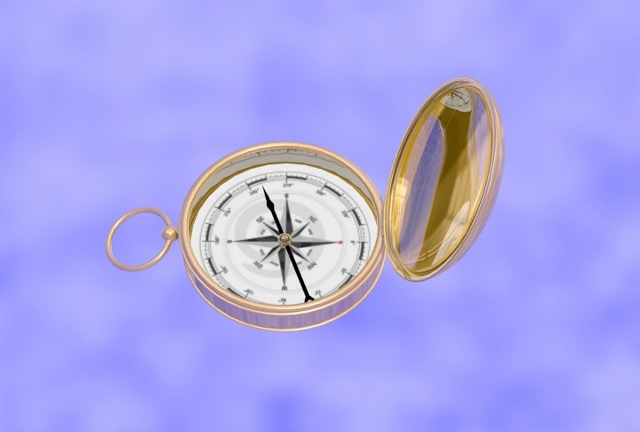 The compass that Trenton modeled. 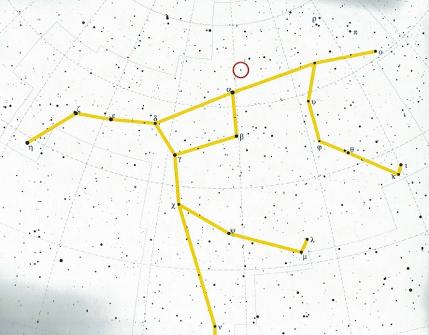