I’ll admit that one of the first questions I had for the Dr. that had just given a presentation on the dangers of vaccination was “What about tetanus?”  For most people, there is great fear that accompanies the word tetanus.  It is generally believed that tetanus is a highly fatal disease, but an examination of the data proves otherwise.  A 1998 evaluation of tetanus by the CDC found that the death rate from tetanus was 11 percent, which is nowhere near “the 100% percent mortality rate” that most people associate with tetanus. It is also commonly thought that the tetanus shot will prevent the onset of tetanus, yet the data shows that even if a person has had three or more tetanus shots, it is still possible to contract the disease.    [CDC, “Tetanus Surveillance” MMWR 47(July 1998,55-2):13]

An issue of the British Medical Journal reported that tetanus can occur “despite adequate immunization and [adequate] levels of neutralizing antibodies.” [Letter to the Editor, British Medical Journal 321 (Feb. 5,2000):383] Another study stated that “Nearly twenty-five percent (24.8%) of those who contracted acute tetanus had at least one dose of the vaccine and more than twelve percent (12.4%) of the patients were fully vaccinated.” [Morbidity and Mortality Weekly Report (MMWR) from the CDC called "Tetanus Surveillance—United States, 1995-1997"]

So the question remains, how do we prevent tetanus? The CDC itself states two methods.   “Tetanus is preventable through both routine vaccination and appropriate wound management”.   As evidenced above, frequent tetanus shots may actually give a false sense of security; therefore, appropriate wound management is most important.  The best way to protect an injured person from the disease is to thoroughly clean the wound with copious amounts of warm soapy water and to encourage the injury to bleed profusely (for several minutes) to clean out any spores.   When my son stepped on a rusty nail  so hard that it almost came out the top of his foot, we prayed and did this followed by hydrogen peroxide to further bubble out anything.  Then we soaked his foot in charcoal water, and followed that with a plantain [the herb] poultice.   The next day he was out jumping on the trampoline with no pain or swelling whatsoever.  Others have told me they use tea tree oil after washing the wound.

Tetanus is an acute, spastic paralytic illness caused by a toxin released from the bacterium clostridium tetani.  The tetanus bacterium can only thrive in areas where there is no oxygen.  There are several forms of tetanus- neonatal, cephalic, localized and generalized.

1. Neonatal is the most common and the most deadly. However, the vast majority of these cases occur following childbirth as a result of using non-sterilized equipment to cut the umbilical cord.

2. Cephalic tetanus, the least common, causes muscle spasms in the face, leading to a classic case of lockjaw.

3. Localized tetanus is recurring muscle contraction near the original site of the infection.

4. Generalized tetanus, the most common, is the slowest to develop.  The disease is characterized by a gradual increase in muscle rigidity and muscle spasms.

The symptoms of any kind of tetanus develop very slowly.  The incubation period –the time between the injury and the development of a full blown infection—can range from five days to 2 months, but the initial symptoms commonly begin to appear within 14 days.  Early symptoms of infection include restlessness, headache, and localized itching or pain at the site of the injury.

2. Encourage the wound to bleed profusely

3. Wash with warm soapy water ( and hydrogen peroxide, if desired)

4. Soak in charcoal water, if available 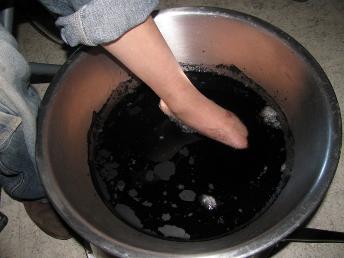