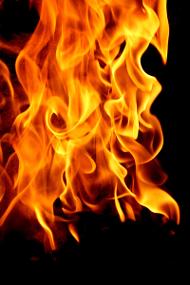 While working for a ministry in a remote area of Northern Washington, a neighbor of mine, while lighting her propane stove had it explode in her face.  The result was not pleasant at all as she suffered singed hair, singed eyebrows, and far worse, her arm that held the match was severely burned.  Just previous to this incident she had been reading about a natural remedy for burns, so her teenage sons immediately went to work putting the claimed remedy to the test.  They grated raw potato, put it in a pan of cool water and put her arm in it immediately to soak.   The outcome was noteworthy with total healing and no scaring.

Fast forward about 6 years later.  I was working as girl’s dean at Oklahoma Academy.  It was wintertime and several of my girls were sick.  We got busy in the deans apartment making ‘grapefruit penicillin’ over a hot stove.  My daughter moved a large pot of boiling water from the stove to the sink and while doing so, it tipped and poured over her arm and hand.  Immediately we ran cold water over her arm and saw the skin slough off.  Because of the memory of the wonderful outcome of healing my friend had a few years prior, we shredded a few potatoes and put them in cool water, and immediately her arm was placed in this potato water to soak.  As long as her arm was in the water there was no pain.  After several hours, when the water warmed, we made a new batch of potato water in cool water.  She slept the best she could while her arm was kept in the potato water through the night.  Only when she was able to remove her arm without it hurting did we stop the treatment.  Again, this remedy promoted complete healing with no scaring and no infection.

So recently, once again, there was an occasion for using this amazing remedy.  I was canning fruit and wearing flip-flops (not recommended).  It came time to pour boiling water out of the canner due to a broken jar.  I took the pot to a compost pile and carefully as I could I poured the contents but it splashed back at me, and in particular, my right foot.   Quickly I made my way back to the house and called for back up.  Potato was grated into a bowl of cool water and I continued to soak my foot in this potato water until when it was removed the pain was gone.  Again, this simple remedy worked wonders.

So what is in potatoes that provide healing?  Potatoes consist of about 80 percent water and 20 percent solid matter. Starch makes up about 85 percent of this solid mass, and the rest is protein. Potatoes also provide vitamins including niacin, riboflavin, thiamin, and vitamin C. They also contain minerals such as calcium, iron, magnesium, phosphorus, potassium, sodium, and sulfur. (Answers.com)

In nature we will find the perfect remedy for every ailment.  "God has caused to grow out of the ground herbs for the use of man and if we understand the nature of these roots and herbs, and make a right use of them, there would not be a necessity of running for the doctor so frequently, and people would be in much better health than they are today.”  PH p.144