There should be no doubt in any thinking person’s mind that diabetes has reached more than epidemic proportions. In 2010, there were estimated to be 79 million pre-diabetics and 25.8 million diabetics just in the US—this is 1/3 of the population. www.cdc.gov/diabetes/pubs/pdf/ndfs_2011.pdf  Further statistics from the CDC compiled by an ND show that in 2005, diabetes is recorded to have caused 638 deaths, 65 cases of blindness, 487 kidney dialysis and 219 amputations---PER DAY! (“Diabetes—the Silent Killer” The Co-op Country Roundup, Vol 14, Issue 3)   Other complications of diabetes include kidney disease, atherosclerosis, neuropathy (loss of nerve function) and a predisposition to infections.

Despite medical interventions for diabetes, the World Health Organization statistics state that, “An estimated 30 million people world-wide had diabetes in 1985. By 1995, this number had shot up to 135 million. The latest WHO estimate (for the number of people with diabetes, world-wide, in 2000) is 177 million. This will increase to at least 300 million by 2025. The number of deaths attributed to diabetes was previously estimated at just over 800,000. However, it has long been known that the number of deaths related to diabetes is considerably underestimated. A more plausible figure is likely to be around 4 million deaths per year related to the presence of the disorder. This is about 9% of the global total.”  www.who.int/mediacentre/factsheets/fs236/en/

There are 2 basic types of diabetes. Diabetes mellitus is the most common, while diabetes insipidus is a rare metabolic disorder.  Diabetes mellitus results from a defect in the production of insulin by the pancreas.  Without insulin, the body cannot utilize glucose (blood sugar), its principal energy source.  As a result, the level of glucose circulating in the blood is high (high blood sugar--hyperglycemia) and the level of glucose absorbed by the body tissues is low.   Diabetes mellitus is divided into two categories:  Type 1 diabetes, called insulin-dependent or juvenile diabetes and type 2 diabetes, or non-insulin dependent diabetes. Type 1 diabetes is associated with the destruction of the beta cells in the pancreas. 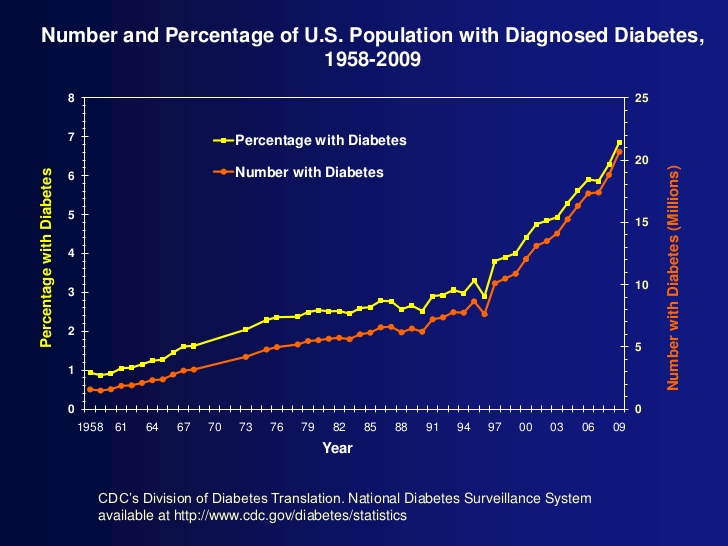 “Bless the LORD, O my soul, and forget not all his benefits: Who forgiveth all thine iniquities; who healeth all thy diseases;” Psalm 103:2,3   The Bible states here, that God has a plan for healing every disease. Of course, diabetes is no exception.

Since "Death" is 3/5 "eat," changing the diet is always a good place to start. We need to eat more fiber and consume more complex carbohydrates.   This means avoiding refined flour; instead using wholegrains in the diet. Simply replacing white breads with whole grain breads, white pasta with whole grain pasta and white rice with brown rice, while at the same time increasing vegetable intake, can make a significant impact on the health. “By prescribing diet and exercise, James Anderson, M.D. of Lexington, Kentucky, and colleagues stopped insulin completely in two-thirds of their lean diabetic patients, and reduced the amount of insulin in the other third…On a high-CHO\Fiber diet, plus exercise, 80% on insulin won’t need any. The 20% who do can reduce their dosage by 80%.”  http://www.ucheepines.org/diabetes-revolutionary-treatment/  This is good news!

“Type 2 diabetes, can usually be controlled by dietary modification and exercise…. Eat a high complex carbohydrate diet, low-fat, high fiber diet including plenty of raw fruits and vegetables as well as fresh vegetable juices.  This reduces the need for insulin and also lowers the levels of fats in the blood. Fiber helps to reduce blood sugar surges.”   Prescription for Nutritional Healing by Balch, MD and CNC, pg 232

Exercise also plays a crucial role in controlling diabetes and lowering blood sugar.  Exercise enhances the sensitivity of the tissues to Insulin, increasing the number of Insulin receptors. It also helps decrease body fat, thus making people more sensitive to Insulin. It promotes the metabolism of glucose, using up calories that have been added by food intake. To maintain the beneficial effects of exercise the person must be committed to regular exercise at least five times a week. This can be accomplished simply by brisk walking in the morning and evening. Walk for at least 40 minutes in a day to manage your diabetes effectively.

Perhaps the 8 doctors (Fresh air, exercise, water, rest, temperance, nutrition, golden sunshine, and trust in Divine Power) aren’t so outdated after all.  If all would employ them, we could overcome the Diabetes Epidemic.

Type 1 diabetes is typically seen as harder to reverse completely since it is associated with the destruction of the beta cells in the pancreas.   The pancreas then produces little or no insulin. This can happen due to autoimmune issues, bacterial or viral infections, incompatible foods in the diet, heavy metals and chemical exposures (or a combination of any one or more of these factors), to name but a few major triggers. But there is reason for hope, as one study shows that the body can improvise, even in the case of a malfunctioning pancreas. Headlines on the website for the Juvenile Diabetes research Foundation state that, “Diabetes Researchers Show Some Cells in Pancreas Can Spontaneously Change into Insulin-Producing Cells”

Upon further investigation, we find that “A study, conducted at the University of Geneva … has found that alpha cells in the pancreas, the cells which secrete the hormone glucagon, can regenerate themselves into insulin-producing beta cells after normal beta cells have been destroyed.  The study is the first to show that this change of alpha cell into beta cell can happen naturally and spontaneously.The researchers, led by Dr. Pedro L. Herrera, discovered that when they destroyed beta cells in mice to induce an artificial form of type 1 diabetes, the alpha cells in the pancreas then changed into insulin-producers.  They found that when nearly all of the beta cells had been destroyed, if mice were given insulin therapy to keep them alive, the alpha cells spontaneously changed into functioning beta cells. After enough alpha cells converted into beta cells, insulin therapy was no longer needed.”   http://asweetlife.org/feature/the-regeneration-of-beta-cells/

Simple foods like flaxseed, red clover, turmeric, and cornsilk have been shown to encourage regeneration of beta cells while some studies suggest that other simple substances like green beans, dandelion, and blueberry leaves contain compounds that may mimic insulin.  Natural foods are very important for healing a worn down system, and form the foundation for the healing process also of type 1 diabetes.  You may be able to jumpstart your healing process by eating raw foods and eliminating meat and dairy.  An article the August 1999 issue of Diabetologia and published on PubMed stated that there was a “pronounced … relation between beta-casein (A1+B) [which is milk protein] consumption and [type 1] diabetes (r = +0.982).”  PMID:10096780  In other words, eating milk protein significantly increases the risk of developing type 1 diabetes.

Furthermore, “According to Dr. Kirt Tyson, a naturopathic doctor who practices in Arizona, eating a diet that primarily consists of raw foods can dramatically reduce blood sugar levels in type 1 diabetics, perhaps even stopping their insulin dependency…..Dr. Tyson …revealed that, prior to starting a raw food diet, his blood sugar level was extremely high (diabetic ketoacidosis) at around 300 mg/dL. Anything above 240 mg/dL is cause for concern.However, within 2-3 weeks of eating raw foods - nuts, seeds and vegetables with no dairy, meat or fruits - he checked his blood sugar again. The unbelievable result? His blood sugar level dropped to an acceptable, safe range: 76 mg/dL. Today, he says he only needs insulin if he becomes sick (which causes blood sugar levels to rise).” http://www.naturalnews.com/042441_type_1_diabetes_raw_food_diet_natural_treatment.html

The healing process for type 1 diabetes also needs to include finding the source of the autoimmune problem so that the body will not kill off the newly formed beta cells. Cases must be treated individually to find the cause of the autoimmune condition.  We highly recommend, “If any of you lack wisdom, let him ask of God, that giveth to all men liberally, and upbraideth not; and it shall be given him.” (James 1:5) 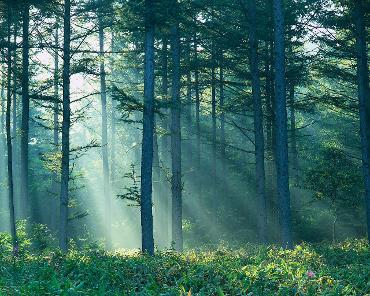 But one answer to preventing autoimmune disorders could be just outside your window—Vitamin D—the sunshine vitamin. The Bible says, Truly the light is sweet, and a pleasant thing it is for the eyes to behold the sun: (Eccl. 11:7)   Scientific evidence indicates that vitamin D plays a vital role in the normal functioning of the immune system and vitamin D deficiency can lead to the malfunctioning of the immune system, causing autoimmune disorders like Type 1 diabetes.   A study, from Harvard School of Public Health, published online Feb. 3, 2013 provides a simple answer to preventing [and potentially reversing] Type 1 diabetes. The study found that “having adequate levels of vitamin D during young adulthood may reduce the risk of adult-onset type 1 diabetes by as much as 50%.”  Kassandra Munger, a research associate in the Dept. of Nutrition at HSPH commented, “It is surprising that a serious disease such as type 1 diabetes could perhaps be prevented by a simple and safe intervention.”  https://www.hsph.harvard.edu/news/press-releases/low-vitamin-d-levels-may-increase-risk-of-type-1-diabetes/

Yet this is not the first study to demonstrate this concept. Another study, from Finland, published in the Lancet in 2001, began in 1966 when a total of 10,821 children born in Northern Finland were enrolled in the study. Frequency of vitamin D supplementation was recorded during the first year of life. These children were then followed for 31 years for the development of Type 1 diabetes. “Researchers made the amazing discovery that those children who received the daily recommended dose of 2000 I.U. of vitamin D during the first year of their life, had and almost 80% reduction in the risk for the development of Type 1 diabetes, compared to those children who received less vitamin D.” www.Diabetesspecialist.com/vitamin-D-and-Diabetes-connection.html    Imagine the results, if the children had continued to receive adequate sunshine and vitamin D!

God’s plan for overcoming the diabetes epidemic could be as easy as a whole foods, plant-based diet, temperance/detoxing to rid the body of excess chemical triggers, daily exercise and daily sunshine.  We hope you’ll try God’s Plan today.

Question in response to Pharmakeia, the Sorcerer's Wand: So what happens if you need insulin to live? Do you die?

Answer: No, we don't want you (or whoever) to die. Although we don't claim to be experts on diabetes, we do know that type 2 diabetes is reversible with nutrition and regular exercise. Nutrition includes whole grains, nuts, legumes/beans and lots of raw veggies with some whole fresh fruit as well as elimination of "junk" foods.

The meds only treat the symptom, but blindness, amputation, and death are still often the end result of diabetes, so it is in your best interest to change your lifestyle.

Type 1 diabetes is more complex, although the same lifestyle changes can generally allow you to greatly lower your doses of insulin.  Since type 1 is an autoimmune disorder it must be dealt with on an individual basis. You will need to ascertain the cause-- whether a chemical toxicity from environmental factors, heavy metals, bacterial, or viral-- and treat the root of the autoimmune disorder.  This will obviously take extra wisdom from God who promises, " If any of you lack wisdom, let him ask of God, that giveth to all men liberally, and upbraideth not; and it shall be given him." (James 1:5)

Some other helpful tools that you may wish to research with regards to diabetes include dandelion root, flaxseed, milk thistle, huckleberry, aloe vera, onions, green beans, cayenne, and hot and cold packs over the pancreas and kidneys to stimulate insulin production.

I have seen some amazing reversals in diabetics including a woman who lost her eyesight, but later reversed her diabetes with diet and exercise.  She can see and appears normal now.

Here's a link to a  very short class on "How to beat Diabetes Naturally" presented by John G. Clark M.D  that you might find helpful.  www.youtube.com/watch?v=y8OdjZIw6fA